This was the answer of some men cutting down trees when Spaniards asked what is the name of the place, honestly mistaking “Como sellama este Pueblo” means asking what they’re doing.

The Spaniards also thought that their question was answered due to the difference in languages. Hence, that place was called “Tapaz.”

The Municipality of Tapaz is located at the centermost part of Panay Island. It is an agricultural municipality in the province of Capiz, composed of 58 barangays. It has a total land area of 59, 743.88 hectares. Its major products are palay, corn, sugar cane, coffee, coconut and peanuts.

For the private institutions, the Municipality has two schools: Our Lady of the Most Holy Rosary Academy and the Kings Meadow. OLMHRA is founded by Rev. Fr.  Deodito Batiles and is being managed by the Dominican Sisters. Kings Meadow is owned and managed by Mr. and Mrs. Noli Catubuan.

In the early 1600, there were scattered houses and no organized town and barangays. In the year 1673, Tapaz was first established as a barrio of the municipality of Dumalag. The founder Don Manuel Artuz ordered the people to build their homes near to its other to form a barrio in a place now called Daan Banwa.

However it was found out later that the place is very limited for a growing population and the Malinao River frequently overflowed its bank during rainy days, on which endangers the lives and properties of the people. For these reasons, the settlement area was transferred to its present location. Gradually the new settlement area has developed into an organized municipality and declared its political independence from Dumalag with Don Pedro Gimeno as the first Captain.

With the increasing population, Capitan Indo (as Don Pedro Gimeno was popularly known) established a public market and a church for Roman Catholic believers. Padre Alberto Bebiera was the first Parish Priest from Banate, Iloilo.

The natives of Tapaz are mixture of several ethnic groups as the Malays, Spaniards, Indonesians, and the Aetas or Negritoes who are the aborigines of Panay. In the recent years the residents are distinctly grouped. Those in the lowlands are called as the “Baludnons” and those in uplands are called “Bukidnons”. Through intermarriage economic and educational advancement, they are almost assimilated nowadays.

The famous “Binukot” still exists and the well admired courtship dance “Sinulog” remains part of the cultural life in a family who is quite economically sufficient among the tribe.

The Binukot is kept in the house from childhood and was never exposed to the public. Only the family members and close relatives could set their eyes on her. She seldom goes out for a walk but whenever she does it, she is provided by a “Hadong” (a cloth material or something of the kind) to protect her fair skin from the rays of the sun. She is showered with care and protection that all the family can give. She is not allowed to work even from doing simple household chores.

Tapaz gradually continues to grow as a municipality. A public market was built at barrio San Jose during the incumbency of Viciencio Gloria Sr. It is almost one kilometer and a half from the Poblacion and separated by the Panay River.

In as much as there was no bridge, the people find it difficult to commute during rainy days especially when the river is over-flooded. Some people commuted by means of banca or bamboo rafts not only during market days but almost every day when going to other places. During sunny days, jeepneys and buses served as the means of transportation.

Last November 5, 1984, super typhoon Undang hit Tapaz destroying properties including the public market, so it was transferred to the Poblacion in its present location.

Through the efforts of the municipal officials headed by Mayor Ramon Gloria and Governor Cornelio Villareal Jr., a concrete bridge was built with Engr. Talatala as the project engineer. The project was partly done. Assemblyman Pedro G. Exmundo and Mayor Remedios Exmundo continued the work until it was finished.

The construction of the bridge brought forth improvement in commerce and industry.

Under the administration of Dr. Ramon Gloria, the Rural Health Center was erected and operated and later on, it was followed by the construction and operation of Tapaz District Hospital at Brgy. Salong. Dr. Gloria also initiated the opening and funding of five Barangay High Schools in San Nicolas, Candelaria, Camburanan, Taft and Katipunan. Unluckily, due to some valid reasons, Katipunan was closed.

The continuous renovation and building of more roads and bridges allows the people to have better access of transportation from the barangays to the town and to another towns or cities.

Through the efforts of then Municipal Mayor, Atty. Pedro Exmundo, and with the support of the Municipal Officials, Congressman Vicente Andaya, Governor Esteban Contreras, Mayor Ethel Jinon of Jamindan, the national highway road connecting Tapaz and Jamindan was cemented. This was also followed by the construction of bridges at Sibaguan, Malinao and Agpilili rivers.

Under the present administration lead by dynamic Municipal Mayor Roberto O. Palomar, Municipal Vice-Mayor Ma. Fe Gardose and Sangguniang Bayan Members, the long-sought limelight has finally shone to the municipality of Tapaz as currently, it became one of the progressive municipalities in the Western Visayas.

A battlecry of Tapaznons which symbolizes the burning commitment and passion of everyone to persevere, to work hard and to never lose hope has been born:

With the cooperation of the people, sincere public governance of the Municipal Officials, work contribution of the employees and Divine Guidance and Providence of the Most High, the long-term vision of Tapaz is attainable. 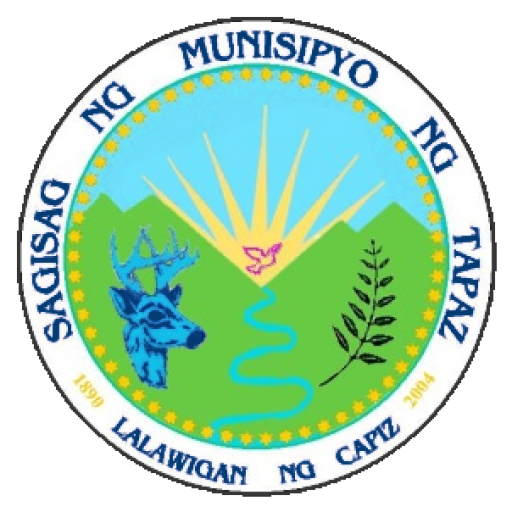